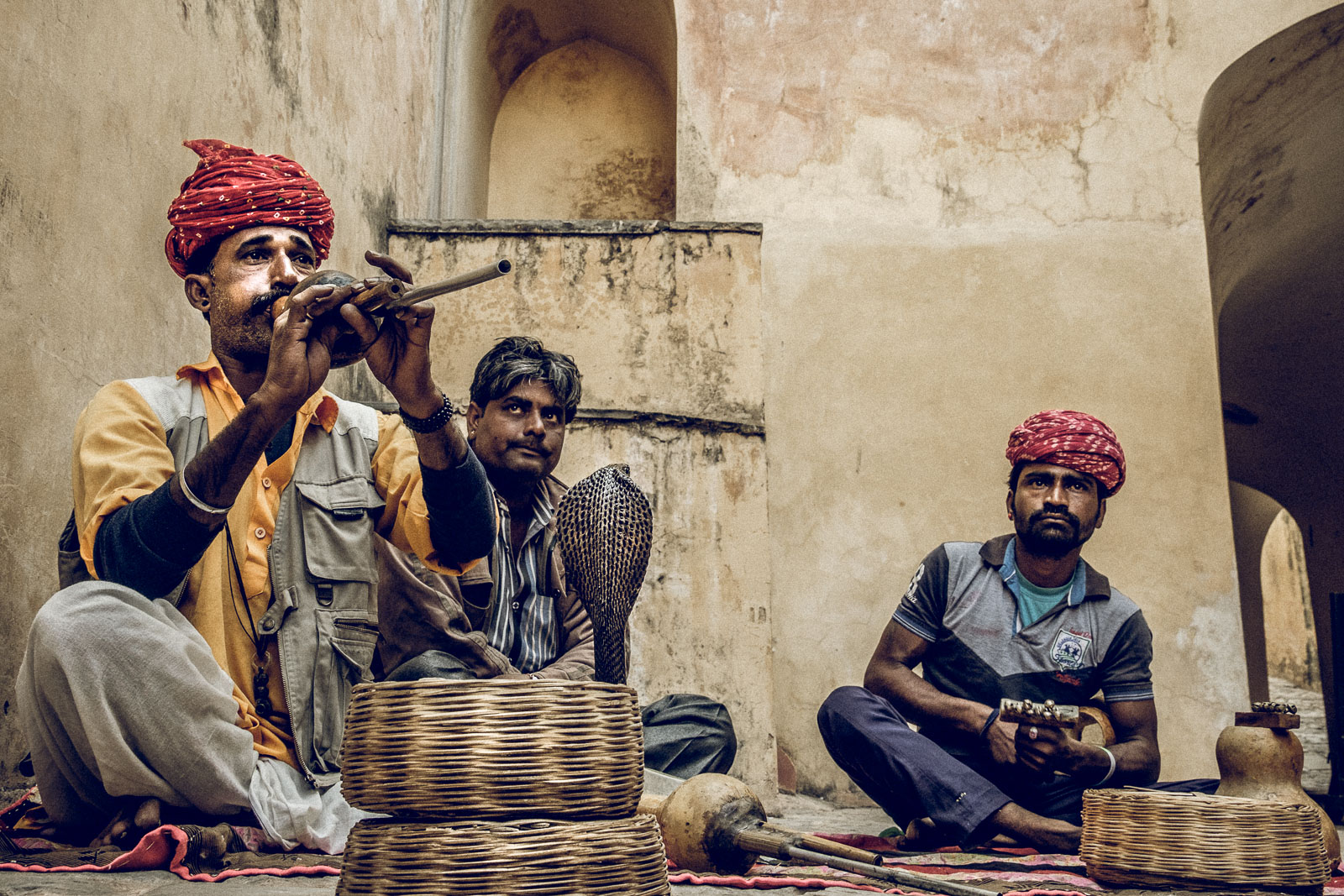 From Jaisalmer to Jaipur we took a night train. The ride was very good. We were very lucky with nice and clean 3AC compartment. There was a little crazy and bumpy 5 minutes long  tuk-tuk drive to get to the train station in Jaisalmer, but we took it as a perfect goodbye to the desert city and Abu.

In afternoon we arrived in Jaipur. We went straight to train booking office, to get our tickets to Amritsar. Tickets were no more available, so we got on a waiting list. Trying something new.

Even though we find trains far more comfortable than buses or airplanes and less exhausting too, we were too tired for site-seeing. We unpacked our bags in Vinayak Guest house (fair price for basic room in ok condition) and went for a walk along the big roads to find a place for dinner. Nothing more.

Jaipur is a much bigger city than any other we have seen in Rajasthan. Walking takes a lot more time and you have to stay vigilant all the time. Often you have to walk along the sides of busy roads and cross the nightmare that they call traffic here. We took tuk-tuks and public buses. The distances are too big to cover by foot.

Two days we spent on the sites. The first day we went to see the Palace of the Winds (Hawa Mahal). It is THE landmark of Jaipur. To be honest, it did not really touch our hearts. And on the photo it looks much better than in real life. We did not visit the museum. In past weeks we had enough palaces and forts, so we made the effort to walk until the city palace, but did not go in either. Parks seem much more appealing these days. Though we had our first coconut juice from right from the fruit just near by the palace.

The busy and hectic streets around the Palace of the Winds

View on the Palace of Winds from accross the street

One of the gurus at Mandir Shri Ramchandraji

There are not many cafes around the Pink city (old part of Jaipur). We chose a place that had a good ratings in the social rating sites. But to get there we had to walk more than 3km through the back side of Pink city. We walked smaller streets where life took place just in front of our eyes. On one of the streets we saw a three-man-orchestra playing and a crowd of ladies dancing around it. As we passed by the local man and kids encouraged us to join. And for a big surprise to me Stijn spontaneously engaged in a dance with local ladies, on a street, in India! (For those who do not know – Stijn would be one of the last persons to see on a dance floor, but India seems to be doing magic). the old shirt of Elize

Quite tired we found our way to Anokhi cafe, where we had some tasty, tasty lunch and cakes for take-away. Anokhi is chain of textile shops around India. I had a peek in the shop, which resulted in some shopping…
Now I can say goodbye to the very old and damaged vintage blouse I inherited from my mom. That dear piece has traveled the whole world – made in India, bought in USA in 60’s, sent to Latvia as a second hand in 80’, now back in India, spending its last days here.

Time for a siesta on the street

Designer ad in the streets of Jaipur

Music and dance in the middle of the street

Little kids fighting to be in the picture

Music band having a rest

Shanti shanti in the pink city

With the egg-man on the public bus

Just after 9am we are waiting at our guest house, but the tuk-tuk driver is not there! Should we find another driver? Could we have the same price? Or… let’s take the public bus! We had no clue how to get to Amber Fort by bus, but as the Railway station was close by, we tried our luck there. In fact we just went with the flow and let the bus drivers guide us. We knew that we might have to change around the Palace of Winds, but that was about it. As we were the only tourists on the local bus, the driver and “the manager”of the bus made sure we get out in the right stop. They instructed us to take bus No 29. Almost immediately we saw the bus, but it was so full that we did not want to get in. We just trusted another bus driver (bus No 23)  who promised to take us to the same location. The bus was much emptier. We experienced another colourful ride in India.

First an older man got on the bus. He was very surprised to see us. His first reaction, with a big smile on his face, was: “Welcome to India!” He wanted to know, if we are married and if we liked India. As the bus continued driving, he pointed out to historical sites of Jaipur that we should not miss. Some stops later an egg-man got on the bus. The seats in the small bus were placed along the corpus of the vehicle leaving the centre free. The egg-man placed 4 big packs of eggs in the bus, every pack containing many layers of open egg holders. More than 30 eggs in each layer. The driver set on his sound system, playing an nostalgic Indian song, and begun his way up the hill. The bus was not its best condition, the driver took the turns sharply, speeding and breaking suddenly. My biggest concern were the eggs. The packages were swinging along with the rest of us, uncovered, unprotected, as the drive kept on speeding and breaking. The old man and the egg-man found my concern amusing. I guess the egg-man knew what he was doing… We got out at the Amber Fort safe. Until then the eggs were safe too, what happened afterwards I would not know.

This song – Is Tarah Aashiqui Ka Asar Chod Jaaon Ga – was playing in the bus and according to us, it fits perfectly with the slow climb and the whole atmosphere on the bus:

The Amber Fort can be reached by a ride on the back of an elephant, by a tuk-tuk or the old fashioned way – by foot. We made the climb up. Paid our 500 Rs per person and got lost between the walls of the fort. A guide might have been a wise choice, but it did not fit in our budget. A cleaning man tried to trick us in his guiding around the fort, but we pretended not to understand his desire for a tip. Taking us few floors up for supposedly “good view” did not convince us. At the exit of the fort we had our first encounter with a cobra (a trained one, luckily). Stijn even dared to touch it! India is doing crazy things with him!

When we came back to the city centre we settled our selves in a spot of green grass in front of Albert Hall. We hoped to catch some nice “clicks” (as Indians say), but instead we became an attraction to group of school kids who were on their after-school activities.

Elephants coming out of Amber Fort

One of the many gates at Amber Fort

Ceiling in the women’s sleeping room

A bit too late for the auto-timer selfie

Pigeons circling over the Amber Fort

The end of the day enjoyed at Albert Hall Museum

One of the few productive days

Our fourth day in Jaipur we declared to be a working day. The first quest of the day: find post office, send postcards back home, send home a package with unnecessary gear. We had purchased some unconventional size postcards. We tried to find some matching size envelopes, but that turned out to be not needed. Scotch can solve many problems! The most interesting part of sending a parcel is the packing they do in the post office. You don’t have to have a box to send you items (nor can you purchase one in post office, if you need one). All packages, no matter how small or big, are covered with white cloth that is stitched together. An old style seal is stamped on the corners of package and the seams coming together. All the rest was easy peasy – for pair of shoes, two books and a flask I paid 600 Rs, which was more that satisfying price. Now lets hope the pack reaches the destination.

The next 6 hours we spent in the Peacock Roof Top restaurant profiting from the wi-fi and doing some work. Nothing exciting, just making sure you have something to read and watch. Our working session there had a nice ending with a live music played by local musicians.

The many steps of the Step Well

For the fifth day we had a plan! Somewhere on Instagram Stijn had spotted an interesting site – a step well made with many pyramid like steps. The site turned out to be located very close to the Amber Fort. It meant we had to do the 11 km bus trip again. We knew what to expect, so not many surprises this time. The step well is located at the back side of the Amber Fort. We got out in the stop after the Fort, just followed google maps and soon found our destination. It was a little paradise after crowed and big Jaipur. Almost no-one there. Just the guard of the step well and his friend. Both of them turned out to be very friendly guys, who advised us to take a look at the lake not far from the well. There is not much to say about the well – it is very geometrical and photogenic. You just have to see it and enjoy it your self. The whole town was extremely calm and quite. Only a goat was crying near the lake. We were very happy to escape the hustle of Jaipur in the town of Amber. There is also The Anokhi textile museum, which is located in a UNESCO building and seemed very interesting. Unfortunately we had a train in the evening and we still wanted to find some good food, there was simply not enough time to visit the museum. If I once return to Jaipur, I’ll go there.

The creation of the package

Ready to be shipped

Overview of the Step Well near Amber Fort

Dog and the Step Well

Why cows are sacred in India: they eat all the garbage and plastic thrown at the streets.
Written by Elize TikmaneDecember 5, 2015 India 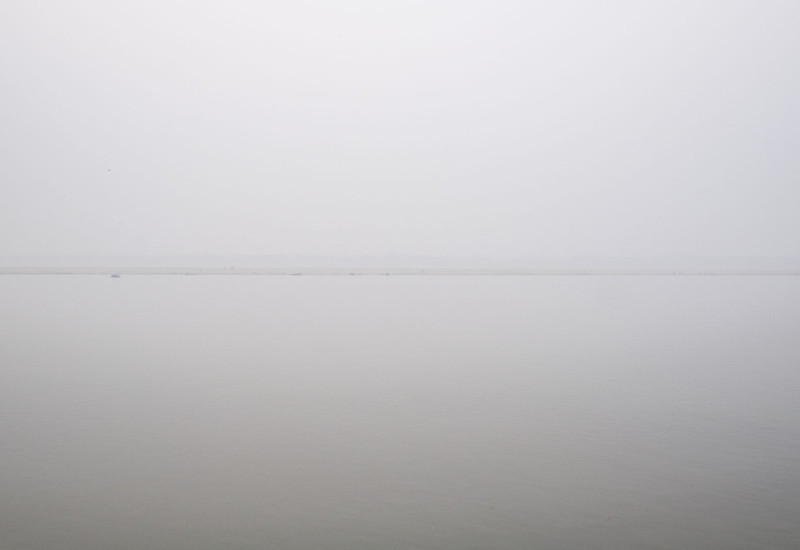 We got on a train to Varanasi