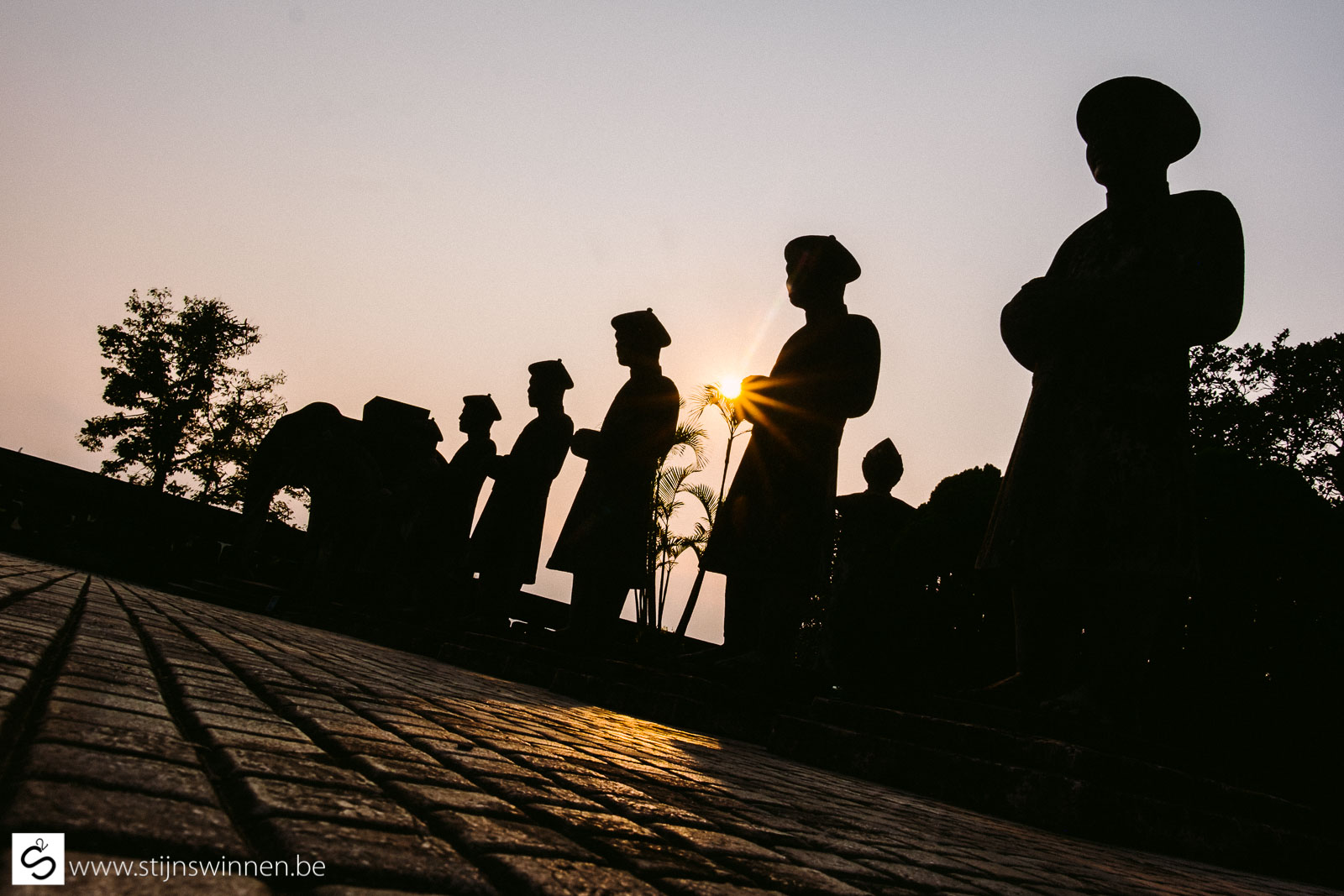 Giving up on and discovering Hue

I do not really remember why we decided to stop in Hue. Part of it is UNESCO World Heritage Site, but that was about all we knew. After Siem Reap temples old castles start to lose their significance, especially if you are trying to do it all in one go. But back on Hue, of course, we wanted to experience the train ride from Da Nang to Hue. In travel descriptions and blogs that always comes up as something breath taking and must-experience. In addition, we figured, that it might be too early to go to Hanoi (we were about 10 days away from going home, home – home), so why not stop in Hue…

We took a train in early afternoon from Da Nang train station. I first had a stop at a very local coffee “shop” to get my take-away iced coffee with milk (Ca Phe Sua Da) in a plastic cup & a transparent bag to keep the lid on (I had a coffee like a real local). We had out tickets booked ahead, to avoid last minute misery, but generally, for a day trip it is absolutely fine to book the same day. The day was gray, cloudy with brief moments of rain. It was getting colder, reminding us that we were moving North.

The train ride is everything you might or have read. The train is absolutely comfy; the views are classy and beautiful. We did not have the best weather, but got to catch the turquoise sea, bays marked with white san shores, palms swinging in wind, rocks, mountains and green jungle. Yes, it was beautiful. I spent most of the time with my nose glued to the window not to miss any part of the landscape. It made me dream about having an escape in a deserted bay only with white sand, sea, book and a tropical fruit. Somehow it almost never happened during our trip. Even though we had promised ourselves not to rush.

Only part of the train ride to Hue is exciting, once you get closer to the destination the land becomes flatter, more monotone and we got caught by rain. We arrived in Hue, when the day was about to set. I really do not understand how come, but we decided that taxi price was too high. So we stubbornly walk the 1+ km to our guest house. Not the most pleasant thing to do, if you have to go to loo… Our little walk made it clear, that Hue was not too much of a fun place. We barely saw any people. Everything looked gray, old and empty. It felt like suddenly the autumn had caught us – both in weather & mood. With moving to colder regions, weather getting worst and the day going home getting closer, we got more and more melancholic.

Guest house or hostel that we had picked was super cheap. 8 euro for a double (turned out to be triple) room. Unfortunately, without a cost – the place had a smell of unwashed linen and bad canalization system. It was also rather cold, but at least we could open the window (unlike in the Agra misery) & crawl in our sleeping bags – problem solved!

On the first night we had no luck with finding a good place to eat. We ended up picking one of the “home kitchens” that are all located in on narrow labyrinth of back streets – surprisingly enough they come up very high in Foursquare & TripAdvisor. It was possibly the worst meal we had had in a long time. It was edible, yes, but that was about it. We had been absolutely spoiled by great food in Hoi An, Ho Chi Mihn & Can Tho. We had become very picky. A good lesson from this experience is to be scared of menus that have too many options and places where toilet is at the back of 2 x 2 m kitchen.

The verdict of Hue after the first night – it is one sad, gray, miserable place. I had totally given up on it. But we still had another full day to kill. Not very inspiring.

The morning came with a determination to make something out of the day and Hue. We rented motorbike from our hostel – everything pretty much in Vietnamese-kind-of order. First stop – breakfast. We had picked a French [inspired] bakery, that turned out to be very good. We also took sandwiches to-go with us for the lunch break. After good, long breakfast we were ready to conquer the sacred old town and castle of Hue.

Before we got to get in the Imperial City of Hue, we had an encounter with a group of young, traditionally dressed, long haired Vietnamese girls. Stijn could not pass by indifferently. The day was warm, I found a nice spot on a bench in the sun, while Stijn made friends with a group of giggling choir girls.

Once we got the the entrance of the Imperial City, we had a decision to make – what do we want to see? There are several options, starting from only Imperial City and moving towards different combi variations, that include several royal tomb sites and museums. Eventually opted for one of combi tickets, that permitted us to visit The Imperial City and 3 tombs by our choice.

So we spent almost the whole day being very cultural. First we randomly explored the gems of Imperial city, admire some nice tile mosaics and wooden architecture. My favorite site definitely is the private palace of queen, designed for leisure and relaxation – a wooden pavilion enclosed by water full with fishes and small islands of bonsai compositions. You can also get ice cream there. 🙂

Bike ride to find the tombs that are slightly outside the city was the most fun. I think we both realised that a good alternative would have been just going for a day ride around the area with the bike. And we got to fill up the gas tank with gasoline from a plastic bottle sold on the side of the road (seems the last time we did it was in India).

We paid visit to three Royal Tombs by our choice. If my memory is correct those were Tomb of Minh Mang, Tomb of Dong Khanh and Tomb of Khai Dinh. Like any other self-respecting royalty Vietnamese guys have tried to show off also after their death, but in a slightly different way. All of the Tombs are large sites, that involves several pavilions / temples gradually leading to the final place of rest. The nature is an important part of the site, some including big parks and lakes or at least floral decorations and statues of animals. The sites are truly peaceful and most of the visitors respect the silence with serenity. The Royal Tombs are a good place for meditation. The blend of architecture and nature, the choreography around them, allow to dive into the atmosphere and come to the bigger questions, that the historical background of every particular site. If you have to pick between the Royal Palace and the Tombs, I would pick the Tombs.

Before it got too late, it was time to return to center of Hue and find something to eat. No more trusting to social travel rating apps – we ask locals for food suggestions and we get rewarded. We visit Hanh Restaurant that definitely popular among locals, because we see almost no one else, but locals at the tables. We order a menu, that includes Vietnamese food classics & local specialties. Fresh, self-rolled spring rolls, yellow pancakes, meat sticks cooked on lemongrass (we tried it few more times in Hanoi) and other small bites. Simple, cheap and delicious! We just keep on loving the local food more and more.

At the end of the day we killed the few hours left to the train in a local coffee place, were the employees were enjoying card games with their friends. Our night train was late, but as a reward we had soft sleeper cabin just for us (we booked 2 beds in 4 bed cabin, but the other 2 were never claimed). We rocked our night away moving direction Hanoi.

Hue seemed hopeless and desperate at the first sight, but it turned into a fun and cultural adventure.

Large statue in the distance 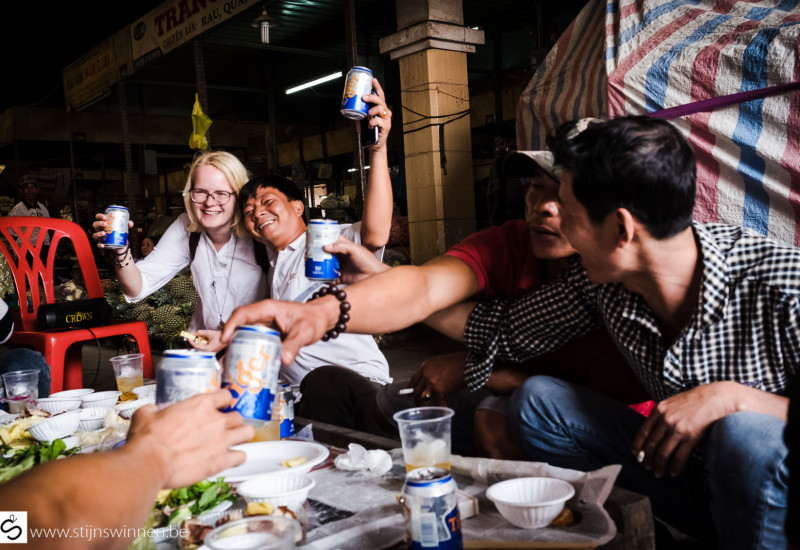 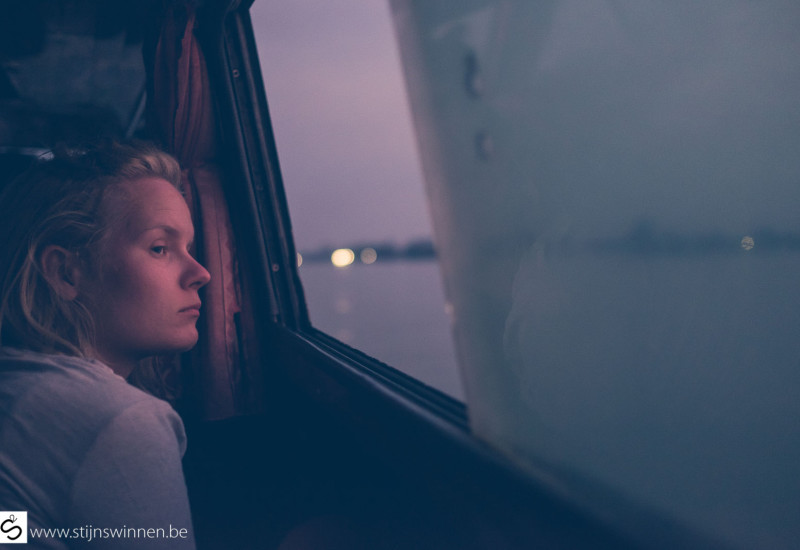