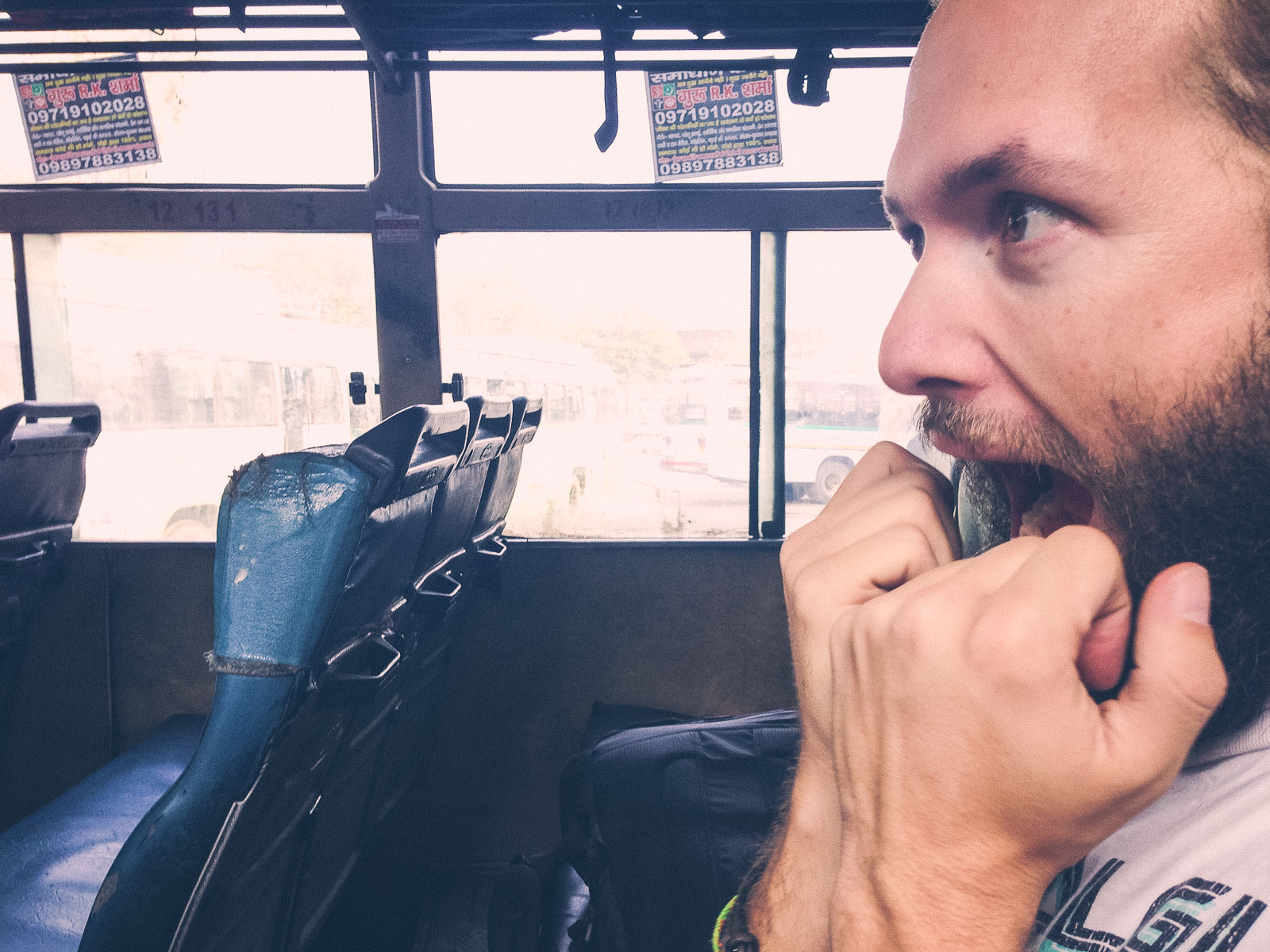 After few inquiries among the residents of Jugaadus hostel, it became very clear that there are 4 main routes going to and from Amritsar. There are those coming from or going to Delhi, Jaipur, Rishikesh or Dharamshala. We had arrived from Jaipur. Our initial plan was to go to Rishikesh (just because everyone was so exited about it), but we changed our plan and decided to get on a 7 hour bus to Dharamshala and McLeod Ganj. The residence of Dalai Lama and the headquarters of Tibetan government in exile.

We embarked the bus at noon. It was quite dirty and old public bus with 5 seats in a row. At least we could pick our own seats and did not have to fight for them. When we left Amritsar there were mostly tourists on the bus. Quite some people were from our hostel, so it made the trip a group adventure. All in all the bus ride was not bad. After 2,5 hours we had a stop in Pathankot for 30 minutes for a toilet and lunch break.

Just as the bus turned out of the station road – BUM! Our first traffic accident in India (check!). To be honest, I am surprised it took more than a month and a half for that to happen. Drivers are crazy here.. But no-one got hurt. The front of the bus was kissed by a motorbike. There was a loud discussion going on for couple of minutes, but the bus driver did not even got out of his seat. Soon it was over and we continued our journey as if nothing had happened.

Once the road started to go up the mountains I felt a bit nauseous, but it was still bearable. For a big surprise we arrived in Dharamsala at 7:15 pm. Only 15 minutes later than expected – very good timing for India. Of course the bus going up to McLeod Ganj had just left. The next was leaving only at 9 pm. It was already dark and cold (around +6 degrees C), so we called someone who might pick us up and offer us logging in his guest house. We were 5 (+luggage) wanting to go up. For the small car that came to pick us up, it was quite a challenge. The taxi driver did not believe we would fit, but in a magic way we did. 3 of the backpacks were squeezed in the trunk – the door had to be pushed very hard to be closed completely, but with some effort it worked. 3 people + a backpack squeezed in the back. We sacrificed our selves and both folded in the from seat next to driver. The gear switch was between Stijn’s legs. Every time the driver had to switch the gears, he had to touch Stijn’s leg too. He never shared how that felt… 11km up the hill with my cheeks in the front windshield – definitely some new experience.

Finding a place to stay was a bit of a search. For the first time we had nothing booked. The first place was very cold and to get a hot water in shower we would have to try to put two wires in the power socket –  thanks, but no thanks! After some bargaining in the second place we got an ok room with a very good view for quite reasonable price. It was very dark when we arrived in McLeod Ganj, we could not experience the beauty of the mountains in the evening. But once we had settled in our room we saw from our window a full moon rising above the mountains – that was magical.

Even though tourists keep on streaming to Dharamsala, the official season there is over. The guest houses are build and equipped for spring and early autumn, not for winter period. The windows are big and thin, there are gaps between the doors and floor. There is no heating system. Only AC and fans, which do not help, if you want to get warm when it is +5/+6 degrees in the night. Our sleeping bags were very handy and I was happy to have my wool sweater with me. Under sleeping bags and thick blanket we survived the night some what comfortably. Sunrise over the Himalayan mountains

In the morning we realised that we have a great view from our room in the Pink Hostel. Behind the hills we could spot few higher peeks partly cowered with snow. To get breakfast we had to climb rather steep stairs. That’s when we realised that we were actually not feeling so well. In McLeod Ganj everything is about going up and down the hill and the stairs connecting upper and lover parts of the city. Here we realised that the last month we have not been active enough. It is painful to discover that making up the stairs takes a lot of effort. And we were only 2000m above sea level… The more we move from one place to another, the more time we need to recover from a train or a bus ride. The first day of arriving a new place officially is a resting day.

Enjoying a magical sunset in peace

We had breakfast in Snow Lion Café. I tried the tibetan bread which is made by partly steaming, partly baking. By the end of our trip Stijn will become musli-fruit-curd-honey expert, since that is his breakfast in most of the places. I am not that consistent. Before we headed back to our guest for a midday nap, we got a 375ml bottle of whiskey – for medical and thermo-balance purposes. (Do not worry, we did not finish that bottle in one afternoon. It was enough to keep us warm for more than 3 evening).

On the way to Old Goa and Panjim by bus