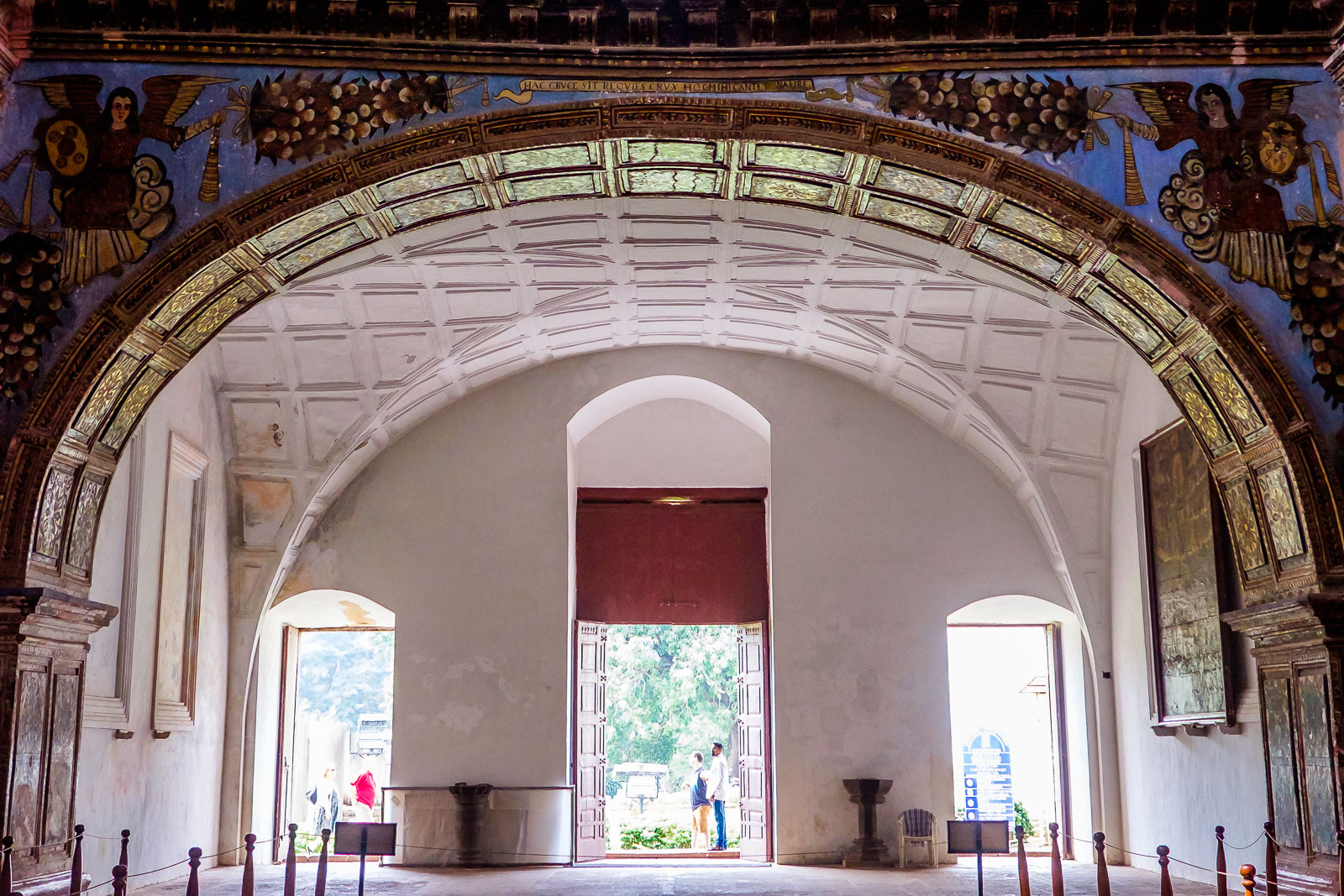 On the way to Old Goa and Panjim by bus

We could not postpone this trip any further, so on Tuesday morning we had a good breakfast in Dunes cafe and then we went to find our way to the bus.

We had enquired the staff of the reception several times about the stops, the busses, timings and prices. I am not sure if we really found the right stop, there was no sign, but the locals confirmed that the bus would stop and go in our needed direction. We did not have to wait long before the bus arrived and what a luck, it was not only going to Mapusa/Mapsa, but also to Panjim/Panaji (the capital of Goa) which was supposed to be the point to change the bus for the second time. For the first half an hour we had to stand in a rather full bus, before we could put our asses down on to the seats.

So we got a ride all the way to Panjim. The bus still passed the Mapusa bus station. We both were happy that we didn’t have to try to find a bus there – it looked too crowded and messy. We were still spoiled by the few people of the Mandrem beach… Though in Panjim we had to find the next bus that would take us to Old Goa. In fact it is really not that hard. You just let the people drag you in their bus. Just make sure it is really going you direction. It is as if all tourists who end up in Panjim are on the way to Old Goa.

If the first bus we took was very regular, nothing special kinda bus, then the one to Old Goa was a bit more extravagant for Europeans eyes. It was old style Indian bus with 25 shoulder to shoulder seats, decorated with colourful lamps above passengers seats (there were no two lamps that would be the same color). “No smoking, No spitting”sign was hand painted. And of course there was an old style portrait decorated with flashy lights and flowers place for the passengers to admire. Really cute!

It was long time ago that I read the Lonely Planet passage on Old Goa, so I was a bit surprised to see only churches. But, oh, well… Churches it is. Very much European baroque with Indian touches (many of them). And Saints all over the place. We have somehow unconsciously chosen a very soft transition to India. Being in Old Goa felt very much like having any other trip in Southern Europe. No complaining though. 😉

Unfortunately the sound and light show (whatever that would be..) in Jesus Bom basilica  is closed on Tuesdays, so we headed back to Panjim. This time in bus we had the luxury to have loud Indian music as a background for our ride and I LOVED IT! While I was eye flirting with the boy few rows in front of us, Stijn took this amazing photo. In Panjim we walked up until the main church, but it was closed just half an hour before we arrived. We were both exhausted, sweaty and getting very hungry. As the sugar level in the blood (and my social skills too) was reaching critical level l I suggested to depend on Foursquare advice and go for a burger place ‘Route 66’ (yes, I know… I know…). But it was really good. It only took a while to get used to the very strong AC.

After the meal we had a walk in the lower streets of Panjim. The architecture and decoration is having many Portugese influences, if not for the contrasty colours chosen to paint the walls of the building one could almost not tell the difference. They have even used tiles to introduce christian titles for the buildings. The influences of the Portugese colonial period are still very present in Goa.

Cat watching bird in the streets of Panjim

Church in center of Panjim

Portugese styled tiles can be found on many buildings in Panjim

To get back to Dunes we had to change bus two times, but as before it went pretty fluent,  you just look touristy and the yelling guys in the bus station will take you to the right bus. We  take our bus adventure as a good preparation for taking a train to Mumbai on Thursday. In total it did cost us 140 Rs in stead of 1700 Rs they ask for a taxi ride – not so bad.

When we came back to Dunes we were greeted with a lot of excitement (seems that not so many guests decide to go for a bus ride here). Some of the staff were still talking about it the day after. 🙂