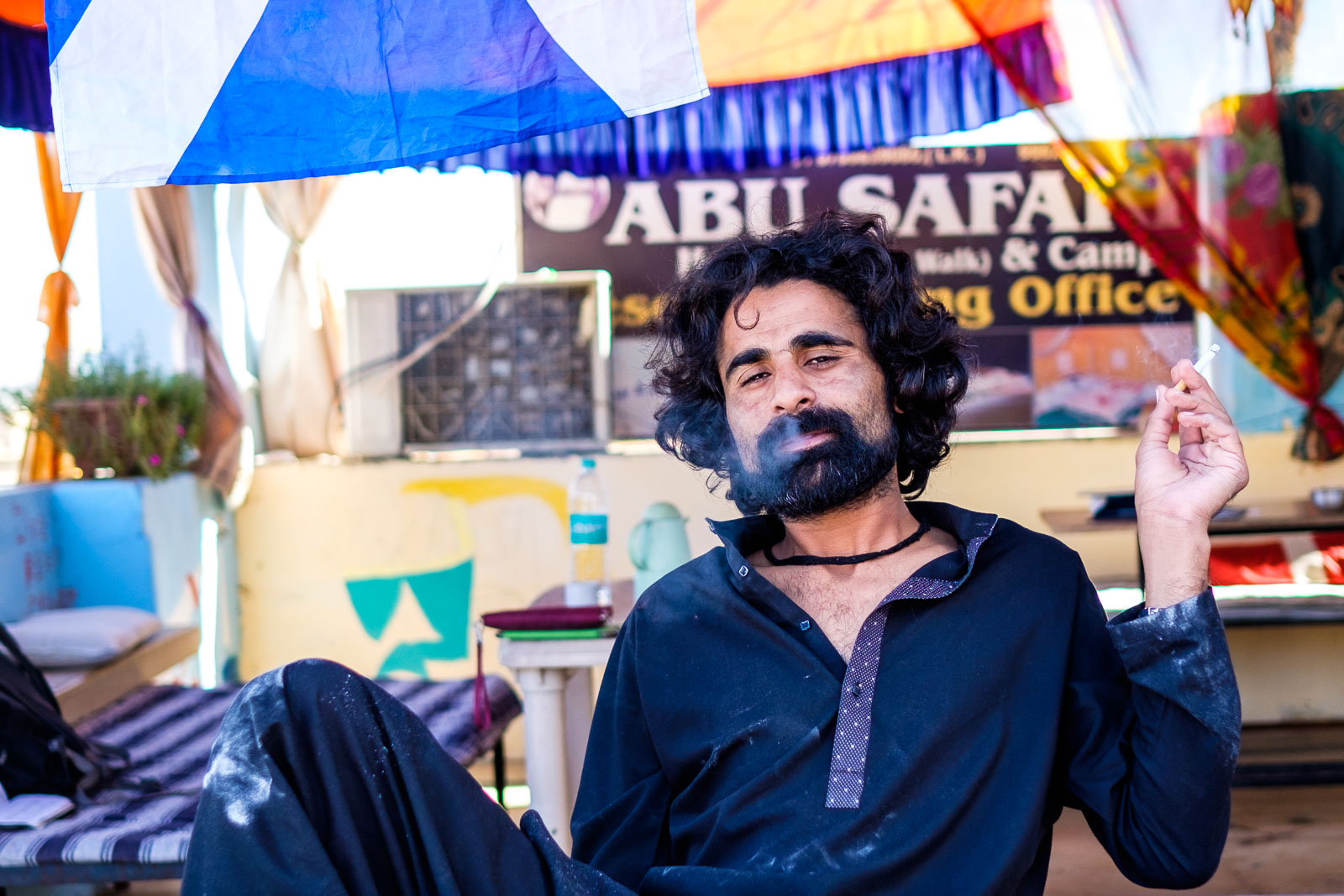 Our main activity in Jaisalmer was volunteering in Abu Safari Hotel.

Abu Safari Hotel is a meeting place for backpackers from all around the world. It is mostly a community of young people in their early 20ies, but no-one feels left out here. As almost all of the hotels and guest houses in Jaisalmer, Abu Safari Hotel has its own desert safari tours, but unlike the rest of the places Abu Safari has Abu.

We arrived in Abu Safari Hotel at midnight. His brother and business partner Bhada picked us up from the station. “Life is Mama mia” was one of the first sentences he told us. Okaay… If you say so… We did not know then that it is one of Abu’s tag lines.

First we were shown “our room” – a room that we had to share with 4 other girls. Hmmmm, ok, hostel life it is… Always staying in guest houses we were not mentally ready for a hostel, but soon we learned that it is not so bad, it took some mind switching though. First thing Stijn sees: two men dragging a drunk old man upstairs.

We met Abu the same night in the restaurant of the roof top. He came to say hello. Dressed in something like a flowery jumpsuit exposing his chest, with his black wavy hair wild he laid himself in front of us on a bed-like chair in a pose of odalisque. “Life is crazy. Life is desert. Desert is sand. Sand is sand. Tourists is wind. Wind always come back. Tourists come back. Life is Mama mia!” He said to us. This is how Abu speaks. In something on might call aphorisms of his philosophy. Make sure you hear the audio on the top of this page. We did not stay up for long to chat longer, but we were sure that “interesting” days were to come.

Having too many first impressions and many room mates we did not sleep very well in the first night. In the morning we had a longer discussion about what to do, but we decided to give it a try. We went for breakfast. As a workawayer you are entitled to free accommodation and free food unless agreed otherwise. We did not know how that would work as the hostel had a restaurant. We soon found out that we can get what ever the cook made that day, but if we wanted something from menu, we had to pay. Well, as baked rice with onion is not our favourite breakfast dish, we decided to pay or go for meals elsewhere, if we wanted. From the first moment there seemed to be a tension between us and the cook (most of the staff actually), which made the whole stay rather frustrating.

Few times we tried to talk with Abu about what would be expected from us, but further than some help with booking sites and Trip Advisor we did not get. Someone also mentioned “shoe farm”. Which turned out to be the C form – a government released form that must be filled in for every tourist staying in guest house. I asked Abu about the plan of the day (mistake!). His answer was clear – “No plan!”. To learn to live with this concept was one of our biggest challenge during our stay in hostel.

On the second night Abu took us to desert. Most of the guests were in the desert doing the camel safari, we were about to join them for evening meal and bonfire. We were sitting with five in the car. It was an Indian driving style we had. Luckily it was not an old tuk-tuk, but a decent car this time. The drivers were a bit crazy though. Here are some “musts” for an authentic drive. The first must in an Indian car is loud music. We were happy to hear the soundtrack of Bollywood movie “Gabbar is back”, which we saw earlier this year in Antwerp. Abu was very happy to hear that we had seen the movie. Most of the Indians are. The second must is to drive like there is no tomorrow – speeding, driving in the other direction lane and talking on the phone to make things spicy. (Remember that Indians roads are full with unannounced speed breaks, which means sudden breaking when you least expect it). If you want to reach next level in the driving game, you add an old hitchhiking man who had missed the last bus to his village. That makes us 6 in the car – 3 people in the back, 1 driver and 2 people on top of each other in the seat next to the driver. To continue the drive repeat step 1 and 2.

Those rums and whiskeys Abu got from the shop were necessary after our little Indian ride to the desert.

The night in the desert was great. We had a dinner cooked on fire together with the rest of the group. Then we moved to a location enclosed by higher dunes to have a bonfire. The safari crew made a circle of mats around the fireplace and brought some firewood. We were sitting under the stars in desert at the fire. That was an amazing experience. If we had not been so tired, it would had been nice to stay for the night under the stars like the rest of the group did.

Abu had brought with him his friend that he introduces as “camel man”. Camel man is someone as crazy as Abu. He was the crazy second driver half time on the phone on our way to desert. He claims to be a gypsy (a gypsy who runs a kebab place). From time to time he would burst out in loud, crazy laugh. Something that Abu refers to as “laughing yoga”. He also sung few songs at the fire…

Making food in the desert

Millions of stars in the desert of Jaisalmer

The most challenging day of our stay was the day after every one left. Suddenly there was no-one around anymore. Abu told us that he would take us to the desert camp site. We were supposed to stay there for 2 nights and then return for our train to Jaipur. We packed our bags to be ready to leave by 2 pm. It never happened. By 2:30 pm it was clear that we are not going there anymore, but why, we never found out. We were kept out of the information pool. That was the point I thought that it is time for us to leave. No plan, no information and tension between the staff was too much for me. But we had no good escape plan either, so we decided to stay a little longer. It turned out that most of the staff was about to change, which created a lot of tension that we could sense, but had no information of. So we just went for dinner out side and hoped that the problems might resolve by them selves.

Luckily, it did get better. Another workawayer arrived, a few more guests arrived and Abu was a happy man again. We got a little bit more used to the “no plan concept” and started to take things more easy.

We’ve had some ups and downs during our stay in the place, which made us question our stay there. But we have met some very nice people here – those working for Abu, as well as travellers. And we are grateful for that. We will for sure not forget Abu. And who knows we return one day to Jaisalmer to see more of the desert and go for a safari with the camels.

Book your next safari in Jaisalmer at Abu Safari. Fun guaranteed! 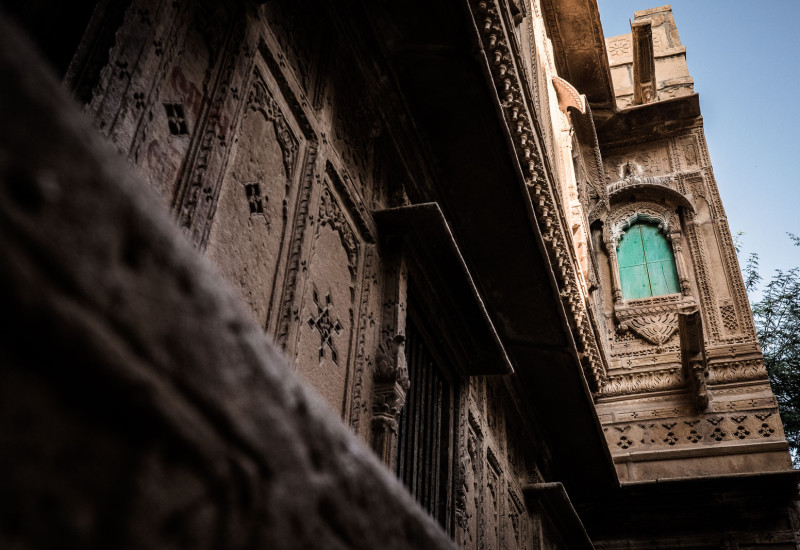