The lady of the Train Ticket office

We had to get up early, since 8 am was the hour we had to be in the train Tourist office to get our number. We were not the first ones. And the lady at our counter was not very satisfied as we had not filled in all the necessary details in the train request form. In her hectic way she helped to fill in the missing details by writing them over all fields and then she gave us number “2”.  – You wait now. At 10 maybe 9:30 I call you!

We decided to stay and wait. Outside was already hot, but inside was very cold because of the AC. There were pigeons flying from one corner of the ceiling to the other and we could watch the employees of the Tourism Office in work. They were all wearing some sort of white dress gown like doctors in a hospital would wear. Around 9 am they were all having chai time with some snacks. Our “agent” lady was very serious looking, I would guess in her late 50s or early 60s. Rather small in her height, but strong in her presence, wearing her grey hair in a dot. She was constantly running from one side of the room to the other and from time to time disappearing in a room which stated “no admission”. Even though she looked very distant she would return my smiles. Around 9:30 she had already passed her seat and computer several times, but no sign of good luck yet. We were getting nervous. Then suddenly at 9:45 she would start actively waving her hand and call everyone to the counter – “quick, quick, come, come”. She was about to perform a magic trick.

We still had to wait for quite a bit.

There was a man in front of us and the system seemed to be failing for several minutes. And no wonder. They have to work with something you might call “vintage computers”. Remember those ones with square slightly arched screen and big back side from 90’s? Yes those! Remember DOS? Well that’s what they have to deal with! And the woman worked magic! When it was our turn it was matter of seconds. She typed as if her fingers were on fire. Never in my life I have seen someone typing so fast. And she might have used only two or three fingers! After the system failure with the man before us I was starting to lose hope. But our ticket was booked in no time. Sunday afternoon 2AC class Mumbai – Udaipur! Thank you, thank you very much dear lady! You worked miracles!

The volunteers at CST

We returned into the hot streets of Mumbai. First we headed towards the Victoria terminal or the CST station. The building is wonderful, reminded me a lot of Castles in Loire Wally in France. Stijn was keen to take photos inside the station. It was crowded. Trains constantly arriving, masses of people passing by. Not my comfort zone at all. Stijn would have liked to stay much longer, but I, unfortunately, I was not up for it.

Cleaning the floor of CST

Volunteers cleaning the platform every time a train arrives at Mumbai CST.

Man sleeping on the steps of the train station

We continued to wander in the streets between CST and Colaba at the same time looking for a place to have late breakfast/early lunch. And again we trusted Foursquare. Kala Ghoda Cafe was another success! Small place with good ascetic interior and very good food. I had a cold broccoli soup and carrot cake with orange cream topping…mmmmmm, very tasty! They also had the best toilets I have seen so far in India.

We had spent time on and off in AC rooms, so for our bodies it was hard to cope the outside temperature. We used the master plan from day 1 – let’s go for a movie! This time in a much cheaper cinema. We picked the first movie they were showing “Pyaar Ka Punchnama 2” (it was also the movie that was suggested to us the day before by employee of the other cinema).

For a big surprise before the movie instead of showing trailers of other upcoming movies we got an educational short about Nepalese language and the all of the spectators stood up for the national anthem (we joined of course). There were no subtitles and except for few phrases in English the whole movie was hindi, but nevertheless it gave us an insight in the perception of relationship from modern India’s young bachelors point of view. It also gave us a pretty clear image of what kind of people are considered beautiful and successful. Lighter skin tone, big muscles, shaved breasts and unsatisfiable desire for partying would be a quick sum up.

Wedding clothes for the lucky ladies

As we were wondering back to our chosen restaurant for dinner, but were not hungry yet, we took the opportunity to peak in the upper class shop for clothes and accessories. Mostly for weddings. OMG! I had a feeling that we had entered in a wardrobe of royal family. The walls were decorated with bordeaux and gold. Antique furniture and design elements were integrated between the accessories and clothes. Those dresses… Heavy embroidered with glass beats, pearls, stones and fine threats. Layers of transparent fabrics combined with thick textiles. With prices going up till 800.000 rS (€11.000) we knew this wasn’t for the average Indian family.  I did not dare to try something on, but how much I would love to do that one day. The jewellery section was not less breath taking, but made to be worn only once in life time and then placed in personal collection or museum.

Caught the last sunshine of the day

Slightly above our budget

Ladies only section on the train

On the way back home we finally got a glimpse of what a crowded train in India means. We were still in pretty privileged situation, as we were sitting and we had to take the train only for few stops. A worried older man suggested Stijn to certainly sit next to me, as trains can get very crowded and people can start to get pushy. He would not like his wife to sit anywhere else but in “Ladies only” section. Haven’t had chance to try on of those yet. As an emancipated western woman I am always sticking around compartment designated for everyone.

Back at our hotel, we still got a few bags of chips and something to drink in a dark alley with many small shops. And specially for Anne Sophie, we did find a copy of the “Vadaa Raha” movie. Bought it on the street, so couldn’t test it yet though. 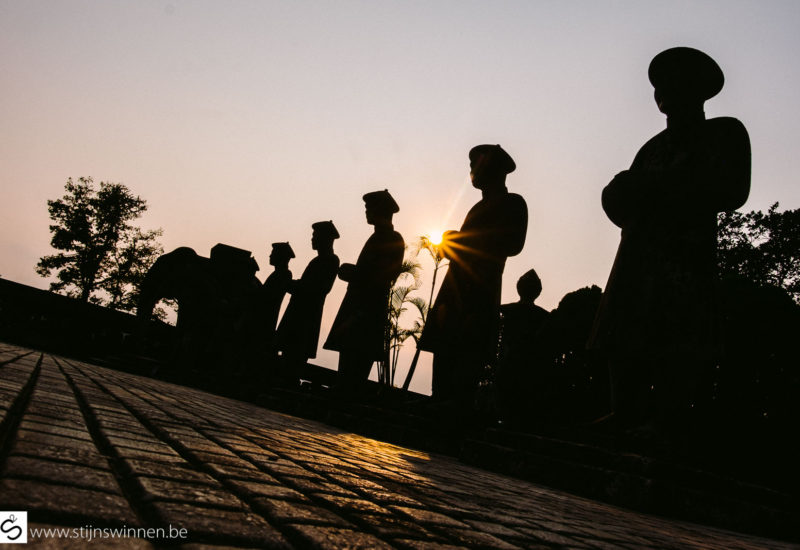 Giving up on and discovering Hue