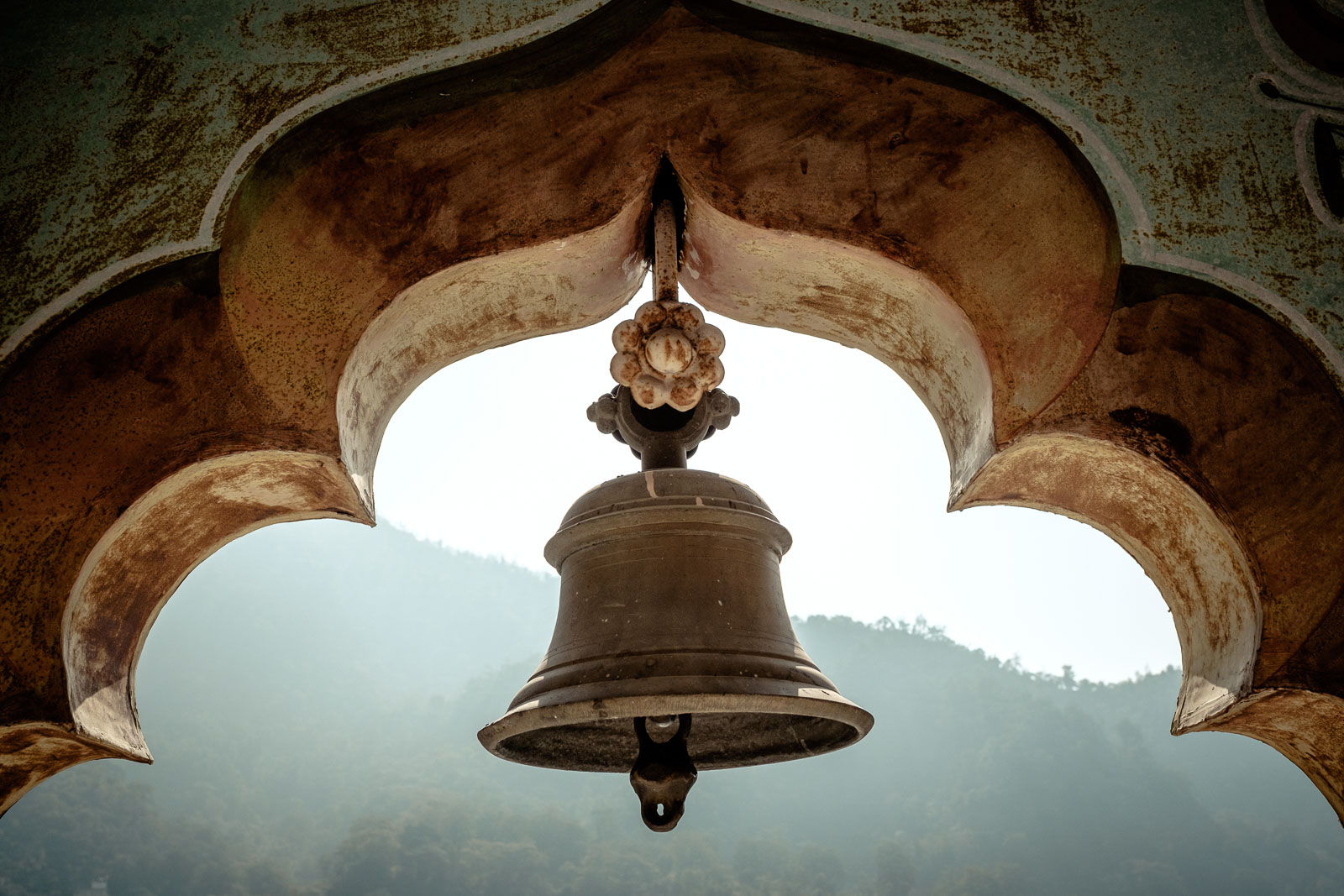 We spent a week in Rishikesh and I have now idea how that happened. We did not even particularly enjoy the place. I guess it has something to do with the fact, that after the crazy and freezing night bus ride, we both had caught some cold. For 3 days we did not really leave the “Swiss hill” (most of the guest houses on the hill are called Swiss something). There are 2 cafes, Nirvana bistro and Reggae café, that serve food good enough and it is possible to get wifi there, so we did not really have to go anywhere else. Stijn was a big fan of the musli-fruit-curd-honey in the Nirvana bistro, and we both liked the momos and big pots of ginger-lemon-honey, they serve in Reggae cafe.

Though, before our cold got really bad, we still hiked to the Neergarh waterfall. It was much more beautiful than the one we saw in Bhagsu. We first had to cross the whole city area between the two bridges (the two Jhulas) on the right side of Gangas. Then we walked for more than 1 km to reach the ticket point (tourists have to pay 30 Rs to see the waterfall). On the way we met a young woman from Canada, Erica, who shared a lot of her travel and yoga experiences with us. Listening to her stories kept us busy while hiking up to the point where you can see the lower part of the waterfall. We realised that the road going up is quite long only when we went back down. The waterfall has many cascades that one can see close by. Some of the daredewils (mostly India men) also had a swim in the little atrtificial pools created around the waterfall. Posing in “sexy” poses, of course, is a must. In the waterfall, next to it, with clothes on or with less of them – everything works.

Swimming in the natural pools of the Neergarh waterfall

It is possible to hike almost to the source of the waterfall. We climbed quite high up, but almost at the top of the hill we were stopped by and angry barking dog. We decided to turn back and have our pastery picnick before we went back down. They say there is a “German bakery” in our Swiss hill. We never saw it, but cafes sell something similar to croisants and cinnemon buns. We indulged our selves with some of those quite few times.

On some of the days we went to explore the city between the two bridges (Ramhjula and Laxmanjhula). There are mostly yoga centres, temples, shops selling tourist goods and cafes trying to attack tourists/western yogis. The last ones have made quite an impact on the sold goods. In many places you can find “organic” products. But more than those, there is a big supply of German and Swiss chocolates, French jams and lots of oat and musli products we know in Europe. We did not slip on those, though.

Temple near Ganges in Rishikesh

View on one of the bridges in Rishikesh

In the streets of Rishikesh

Most of the people go to Rishikesh for yoga. That was not our goal. Before I arrived in Rishikesh, I thought that I might try some yoga classes here and there. Maybe go to an ashram, to see what’s the fuss about. Rishikesh claims to be the capital of yoga, but to be honest, it felt more like a yoga supermarket. The yoga market in Rishikesh is big and the competition is taut. Sometimes, when you go to a supermarket, you end up buying nothing at all, just because there are too many similar products with one name. That is what happened to me. If I ever return to Rishikesh, I would only go to a yoga centre or ashram by recommodation.

Undoubtfuly, the most of the joy of our days in Rishikesh was brought by puppies (the same we met the very first day we arrived) and a sick kitten. We could call it some sort of animal therapy. Every morning before going to breakfast we went to see the puppies in the back side of one of the guest houses. They did not really have much interest in us. If they had any, they lost it after 2 minutes. But it was still fun for us to see them playing and being puppy-clumsy. Puppies might have been the best thing about our stay in Rishikesh.

Our neighbour had taken in custody a sick kitten that had some eye injury and troubles walking. She might have suffered from an attack by a snake or a monkey. Our neighbour had been taking care of the kitten for few days. We met her (the kitten) when she was getting better – starting to walk and was finally coming out of the room. One of the days I was sick, wrapped in a blanked, sitting on our no-view balcony with a cup of ginger-lemon-honey water, reading my book. The little kitten made the way towards me (she had serious walking disorder making her walk sideways). She jumped on the table and then just occupied my lap for next few hours. Every time I returned back to sitting in the chair, the kitten made her way back to my lap. For the sick me, it was very touching and comforting at the same time. I think we kept each other warm – a win win with a kitten.:)